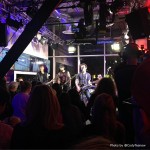 BiteSize TV
The Holiday Meet & Greet photos are up on Facebook. If you were part of the fun, you can find them here: https://t.co/cQXxxE0ejC