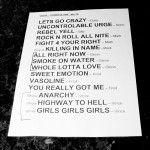 Royal Machines performed in Las Vegas on Friday March 7th at the Cosmopolitan Hotel And Casino as part of a private party celebrating Nascar drivers. The band played with their full line up of Dave Navarro, Mark McGrath, Billy Morrison, Josh Freese, Chris Chaney and Donovan Leitch, and were joined onstage by guests Fred Durst (Limp Bizkit) Glenn Hughes (Deep Purple/Black Country Communion) and Vince Neil (Motley Crue). An hour long set consisted of classic tracks including the Deep Purple classic ‘Smoke On The Water’, a killer version of the Aerosmith song, ‘Sweet Emotion’ and the Motley Crue cut ‘Girls Girls Girls’, complete with an all star sing along chorus from Neil, Durst, Hughes, McGrath and Leitch. Durst pulled the females in the audience up onstage during the song and the shows finale was complete. To stay connected with Royal Machines, you can follow the band on Facebook – CLICK HERE FOR ROYAL MACHINES ON FACEBOOK, on Twitter – CLICK HERE FOR ROYAL MACHINES ON TWITTER and on Instagram – CLICK HERE FOR ROYAL MACHINES ON INSTAGRAM. The full set list is below.

Private Show, The Cosmopolitan
The Holiday Meet & Greet photos are up on Facebook. If you were part of the fun, you can find them here: https://t.co/cQXxxE0ejC