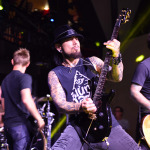 On September 10th, Royal Machines played to a packed house in Denver for Cedia14 and the revolutionary music system, Sonos. The show was inside an amazing church that has been redone to resemble the old New York Limelight club and the band played without any guests for over an hour. Billy Morrison, Donovan Leitch and Mark McGrath shared the vocal duties. The encore was unplanned, but after the audience insisted the band return, and after a few minutes talking between themselves, they hit the stage for a dynamite version of Ratt’s “Round And Round” that was completely unexpected by band and audience alike. The full set list can be seen below. To stay connected with Royal Machines, you can follow the band on Facebook – CLICK HERE FOR ROYAL MACHINES ON FACEBOOK, on Twitter – CLICK HERE FOR ROYAL MACHINES ON TWITTER and on Instagram – CLICK HERE FOR ROYAL MACHINES ON INSTAGRAM. The full set list is below.

Denver, Private Show
The Holiday Meet & Greet photos are up on Facebook. If you were part of the fun, you can find them here: https://t.co/cQXxxE0ejC